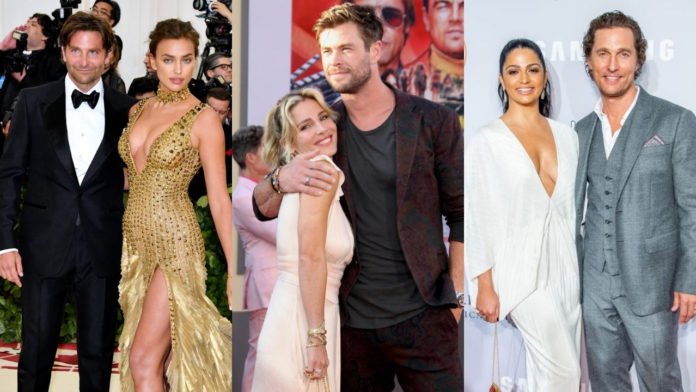 Not everyone has an exemplary relationship, but all are unreal handsome men.

We propose to start with those star alliances that have already broken up, and end with newly formed pairs. By the way, after the break, some managed to create no less brilliant tandems and again settle in the ranking of the best. True, not everyone was so lucky. For example, Brad Pitt and Angelina Jolie are still struggling to recover from their breakup. Let’s start with them.

The official divorce date of Angelina Jolie and Brad Pitt is April 12, 2019. Up to this point, they can technically be considered a pair, although, probably, not only technically. Passions around this union do not fade to this day, and details of their life together appear in the press every now and then. For example, Jolie recently announced that she did not want to marry Pitt at all, but he forced her. Apparently, we will talk about this pair for a long time, so their inclusion in the rating of the most beautiful star alliances of the decade is more than justified. With the fact that both are handsome, no one will argue for sure.

After a divorce from Vanessa Paradis, handsome Johnny Depp went all out. The most striking episode of his personal life of this period was the romance and subsequent marriage with the beauty Amber Heard. The couple met on the set of The Rum Diary. Their stormy romance lasted three years, then a wedding and an equally stormy divorce followed. The couple parted with a scandal, accusing each other of treason and assault. The divorce officially took place in January 2017. By the way, the scandals around the couple do not subside to this day.

If you need to choose the most beautiful couple who broke up completely inappropriately, then it will be Shayk and Cooper. Throughout the past year, their names have flashed so often in the press that now both should become doubly popular. Recall that the romance between the actor and the model lasted four years. They started dating in 2015 and broke up in the summer of 2019.

In 2017, Irina gave birth to Cooper’s daughter Leia. The real reasons for the gap are still unknown. The conjecture that Shayk left Cooper because of his relationship with Lady Gaga was recently dispelled by the singer herself. She stated that there was no romance in reality, and the press was led to a fake created for PR.

Orlando Bloom’s list of passions can be sorted out for a very long time, and it will not be so easy to find the one with whom the actor made the most beautiful couple. After all, Orlando specializes in the conquest of unreal beauties. He was in a relationship with Kate Bosworth, Penelope Cruz, Uma Thurman … True, all these novels were short-term. Bloom lingered with Australian model Miranda Kerr. In 2010, the couple got married, and in 2011 they had a son, Flynn. True, two years later, the heartthrob woke up in Orlando again, and the couple broke up.

Over the past ten years, Ashton Kutcher has made two luxurious couples at once. Until 2013, he was married to Hollywood diva Demi Moore, and then married the younger, but no less brilliant Mile Kunis. The actors’ relationship began at a time when Kutcher was still married. They met in 2012 on the set of the ’70s Show. The wedding took place on July 4, 2015. Now the couple are happily married and have two children.

The list of the strongest unions from among the most beautiful is opened by David and Victoria Beckham, who in 2019 celebrated the 20th anniversary of their marriage. I must say that they manage to maintain the status of the main handsome men in Hollywood without losing their grip. In the past ten years, the couple have consolidated their position, and Victoria has also acquired the status of a world style icon. Now the couple lives in London, where they moved away from the noisy Los Angeles. David and Victoria have four children: three sons and a daughter.

Having moved to England, the Beckham couple found themselves in a dangerous neighborhood with their direct competitors in the race for the title of the most beautiful couple. Prince William and his wife Kate certainly have every chance of winning this fight. Married in 2011, they are still considered an exemplary family, and Kate, like Victoria Beckham, has the status of a style icon. By the way, by a large number of children, the Dukes of Cambridge are also catching up with the Beckhams: they currently have three children, but information about the Duchess’s next pregnancy appears in the press every now and then.

Until 2017, the couple William and Kate had no real competition in Britain. However, on November 27, 2017, the engagement of Prince Harry took place, and it turned out that his future wife is a real beauty. It was then that Kate Middleton had every reason to worry not only about her status as a favorite of the British people and style icon but also about the popularity of their couple with William.

Megan justified all fears and very quickly made their union with Harry the most talked about not only in England but in the whole world. By the way, now the Duchess of Sussex is burdened by this popularity and even decided to leave the UK for Christmas, which many considered a manifestation of disrespect for the people. But since Harry and Meghan are a very sweet couple, they can get away with this dangerous trick once again.

Those ladies who are dry on Matthew McConaughey have long been bitten by all elbows, because their favorite is happily married, and his wife is an unreal beauty. In general, the chances that Matthew’s heart will free itself anytime soon are very small. The actor met the Brazilian model Camila Alves back in 2006. The engagement took place in 2011, and a year later, as expected, the couple got married. The wedding date is June 9, 2012. Matthew and Camila’s marriage is considered one of the most lasting in Hollywood. The couple have three children.

In 2020, Chris Hemsworth and Elsa Pataky will celebrate 10 years of marriage. During this time, the fans of the handsome Thor are already tired of discussing his marriage and worrying about the fact that Elsa is 7 years older than Chris. Hemsworth’s wife looks gorgeous, despite the fact that she is already 43 years old and she is a three-time mom. Few people in a large status manage to maintain such an amazing figure. Apparently, Elsa looks up to her athletic husband.

For a long time, Jason met with British star Kelly Brook, who left him for actor Billy Zane, after which Statham decided not to burden himself with a serious relationship and for some time only entered into short-term relationships. Everything changed in 2010 when the actor met the beauty, Rosie. Apparently, Statham still has a special weakness for top models. It was with this woman that the actor made his most lasting alliance, which has not yet broken up. In 2017, the couple had a son.

Two of Hollywood’s most handsome actors tied the knot on September 9, 2012. Before the wedding, Blake Lively and Ryan Reynolds dated for only 11 months. The union nevertheless turned out to be strong and large. At the moment, the spouses have three children. By the way, frequent pregnancies do not prevent Blake from maintaining the status of a style icon. Her social events always become an event in the fashion world and are hotly discussed. When a couple appears on the red carpet together, their fans can only sigh with emotion.

Alicia Vikander managed to get the heart of one of the sexiest actors in Hollywood, Michael Fassbender while filming the drama Light in the Ocean. There, the future spouses played a childless couple desperate to change this status. There are many love scenes in the film, in which you can appreciate how harmonious the couple looks. They are also good on the red carpet: Michael is invariably brutal, and Alicia is quivering. The actors’ secret wedding ceremony took place on October 14, 2017.

One of the most beautiful and scandalous alliances that have recently formed are Vincent Cassel and Tina Kunaki. Everyone remembers that until 2013 the actor was married to Monica Bellucci, and this particular couple was considered one of the most spectacular in Hollywood. Of course, Vincent cannot be called a classic handsome man, but his charisma is undeniable. In confirmation of this fact, after breaking up with the beautiful Bellucci, 50-year-old Kassel had an affair with model Tina Kunaki, who is 30 years younger than him! In 2018, the couple officially got married.

Since 2010, gossip has been circulating around the idol of all the girls, connecting him either with the singer Selena Gomez, or with the daughter of actor Stephen Baldwin – Haley. According to rumors, it was from the last pair of Bieber – Gomez that fell apart. True, young people denied this fact for a long time, insisting that they were just friends. Later it turned out that there was no friendship between Haley and Justin, but there was definitely love. They got married on September 14, 2018 and are inseparable so far.

These were the most talked about moments on Instagram in 2020

5 tips to help you avoid overeating

5 ways to get a life that is less stressful and not easy to...

15 most beautiful couples of the decade

ABOUT US
My Fitness Fly is the health and fitness blog known for providing knowledge and tips to stay fit. This blog is a resource for you to learn and expand your knowledge of nutrition, fitness, and health.
Contact us: contact@myfitnessfly.com
FOLLOW US
© Copyright 2020 | All rights reserved | My Fitness Fly
MORE STORIES

5 ways to get a life that is less stressful and...

What is anxiety and how does it affect your body ?:...